Hallo, I want to share something that maybe any of you want to know, or maybe not. But i still gonna talk about it. I've been really bored with my playlist on my office laptop when suddenly i just try to find some new music, so i stream a playlist of movie soundtrack, and suddenly i'm addicted to it

Well today i'm going to share to you guys 5 best movie soundtrack (in my opinion). Here they are! 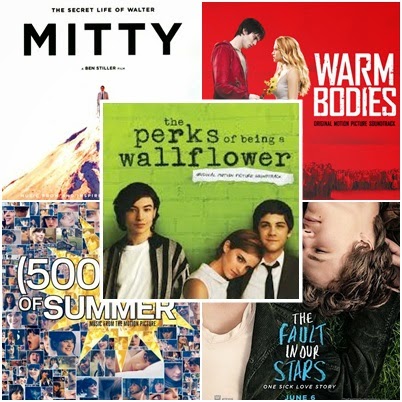 1. The Perks of Being a Wallflower Soundtrack

I told you guys on my profile page that this movie is my favorite movie that also has a great soundtrack. Because it is, it really good, especially if you like 80's - 90's song like me. It's heaven. My favourite track is The Innocence Mission by Evensong.

Are you a zombie? Not all horror romantic movie has a good soundtrack to listen, but this movie is totally different. The R absolutely has a good taste of music. My favourite track is Midnight City by M83.

3. 500 Days of Summer
This movie is so popular, and also both Summer and Tom has a good taste of music. My favourite track is There's a Light That Never Goes Out by The Smiths.

4. The Secret Life of Walter Mitty

Confession! I've never watched the movie yet. When i listening the perks of being a wallflower on youtube this movie soundtrack appeared on the suggestions video then i clicked and i found it so great. My favourite track is Dirty Paws by Of Monsters and Men.

5. The Fault in Our Stars
Cliche? i dont think so, because i dont really into this movie but i admit it that the soundtrack is good. My favourite track is absolutely All I Want by Kodaline.


That's all 5 favorite movie soundtrack i've been listening to recently. I will share the other one next time. See you soon guys!
Posted by ditaastiani at 19:37

Email ThisBlogThis!Share to TwitterShare to FacebookShare to Pinterest
Labels: music and things, you may know